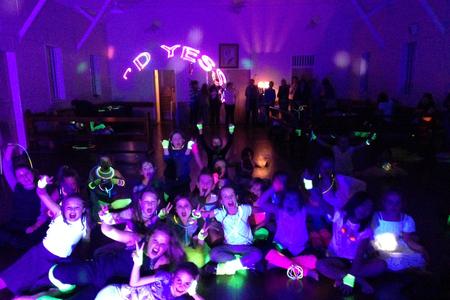 Alexandra left to the UK this week, but said goodbye to her friends in true style with Dancemasters hosting her special "leaving" party. It even snowed inside the church hall and what a great send off for her!! We hope that Dancemasters UK will be in action for your party next year!

“I found Dancemasters Down Under on the web after searching for something different for my daughter’s dance party apart from the normal DJ providers. Mark did an absolutely fantastic job of entertaining the kids and having them fully entertained for 2 hours!! They all absolutely loved it and are still talking about it as the best party ever. If you are looking for the best kids disco in town – look no further and book!

Tilly and her amazing crew - Danced their socks off on the Tennis Court!!

A world first for Dancemasters! DJing on a tennis court and what an amazing set for such a cool Glow Party disco. Tillly and her friends were an incredible dance crew and when darkness fell, they challenged the Lasers earning a new Dancemaster Laser world record!!!

Billy and his Dance Crew ROCKED THE HOUSE!!!

Amazing Laser dance breaking the current world record - now 210% fast! Billy and all his friends were incredible on the dancefloor!! What an 8th birthday party to remember! Billy also was the first person ever to wear the diamond headphones during the DJ Experience before the party began!!

​BEST.PARTY.EVER.  These are the 3 words I have heard from Max and all of his friends after Saturday’s disco party. Thanks so much Mark you were brilliant and the show you put on was amazing. You kept all 30 kids entertained and both boys and girls danced non-stop for 2 hours! It will be a 10th birthday to remember forever. The music was perfect for 9 and 10 year olds and the laser show was fantastic. My youngest son has already told me he is having a disco party for his 10th birthday! It was so fantastic to see all the kids have such a great time. Thanks again and hope to see you at another party soon.
Loreena Clark  - Cooparoo 18th April 2016

After each show, we will invite parents to comment on the performance and enter this below.

Hi mark,
Just wanted to thank you for such a great job last night for coopers 6th birthday.  Cooper had a fantastic time and I have received a text message this morning from every family stating that their child said "it was the best night ever".  You kept them completely engaged for the full two hours, and even the quieter children came put of their shells and were dancing and having a great time.
The music chosen was exactly right for their age and the laser light show, was a highlight.  I have already given your business card to 5 mums!!

Once again thank you so much for making coopers 6th birthday so memorable.
Sarah

I would sincerely like to thank Mark from Dance Masters for their professionalism, amazing show and entertainment they provided for our daughters birthday.  The excitement in the room was electric.  All the children loved the show and the parents were all so complimentary on how organised it was and they all commented on that they have never seen anything like it before.
Thanks again for giving Annabelle a memorable party, an experience she will never forget.  Regards  Michael and Jocelyn - Annabelle's 12th Birthday Show Indooroopilly June 2016

Thank-you so much for what turned out to be ( Quote from a parent “The best Children’s Christmas party I have ever been to”).  Staff and parents both have made comments along the same line since Friday evening and I think the only way to make the our Christmas  party better next year is to invite you back again.  Once again thank-you from all the staff, parents and children of Kids Academy Hope Island.  See you again soon.
Glynn Boyd

Hi Mark,
We were totally blown away with the amazing disco party you did for Lucy's 8th Birthday,  everyone had a fantastic time including the shy children that would normally not get up and dance were all up dancing for 2 hours I couldn't believe how well you engaged the kids!  Lots of sore legs the next time!
Quote from one of the kids as he left "most awesome party ever"!!!!
Will definitely be using you again for future disco parties.

Hey mark - Such cool piccies and such a cool night. You were awesome - thank you so much - really appreciated the effort you put into one amazing disco - we will see you soon :) thx a million debs

The show was wonderful and the kids really enjoyed the interactiveness yourself and the dancer gave to them. They were surprised just how much you moved around and wanted them to join in.
The whole event was very professional and well managed. We as parents did not have to do anything but enjoy seeing the kids have so much fun.
A service to use again and very well priced.
Caryn - Flugel Netball Club - Performance held at the Kedron Wavell Club Chermside - August 2015

Thank you Mark for a wonderful party today. Emmanual had the best birthday ever. We have had brilliant feedback already. Thanks again

​Also check out our latest reviews and photos on our facebook page  https://www.facebook.com/dancemastersdiscos/ 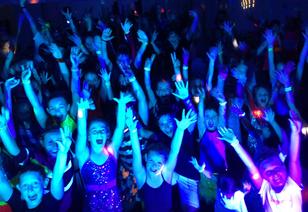